Our customers are the top priority. We comply with all sanitary and hygienic requirements, show care and vigilance towards our guests
the same way we do for our loved ones. We care about the safety of the services provided.

A walk through Lucerne: what to see in one day

Every year, thousands of tourists come to Switzerland to visit ski resorts. However, the magnificent natural beauties and mountains are not all the attractions of this country. Travelers keep being interested in Swiss cities with their unique atmosphere and lots of amusing places.


How to get there

Zurich is the closest to Lucerne airport. You can cover the distance of 50 km by train, which leaves for Lucerne twice an hour. Travel time is somewhat less than an hour.

You can also take a train from Basel Airport to Lucerne. The trip takes about an hour and a half.

Our company will be pleased to provide you with comfortable executive class buses and to offer VIP and premium class transfer services from Zurich or Basel airports.

What is Lucerne is interesting for 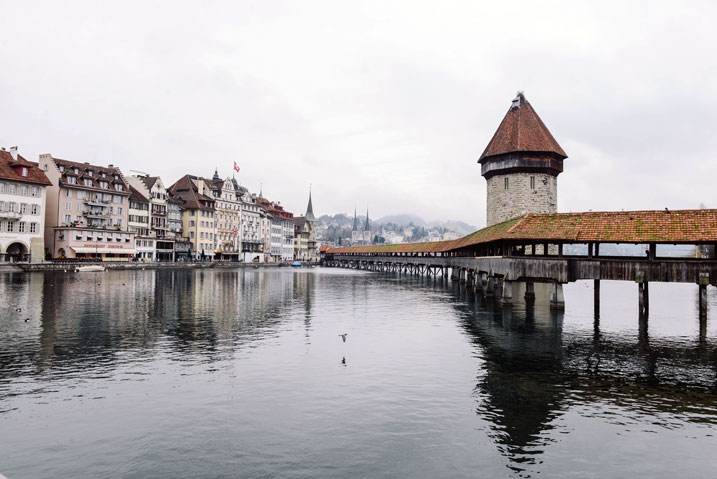 The city is located on the shores of Lake Vierwaldstätter, whose panorama together with cozy Lucerne houses creates an absolutely fabulous impression.
A while back, a Swiss natural scientist Scheuchzer wrote to Isaac Newton about the dragons living in the vicinity of Lucerne. The last time the Lucerne dragons were mentioned dates back to 1934, and against these magical views they are easy to believe in.

Switzerland and Lucerne in particular is a favorite place of many people of art. Even Mark Twain believed that Lucerne could attract lots of tourists and Richard Wagner spent several happy years here. There is even a museum opened in his honor in the city.
Pablo Picasso was overwhelmed by the beauty of Angela Rosengart – his friend’s daughter – and created many of her portraits. These paintings were introduced to the general public at the beginning of 1990s. Besides that, the Rosengart family exhibit the works by Renoir, Cezan, Chagall, Matisse, and Monet at their gallery.

From aboard small ships, cruising around the lake, opens a magnificent view of the city. By the way, it will be interesting to take a trip on the restored wheeled steamers from the last century, or just take on an hour-long excursion.

After the voyage around lake, it’s a good idea to take a walk along the bridges of Lucerne. Kapellbrücke is the oldest wooden bridge in Europe. This is an extremely popular tourist destination and an unspoken symbol of the city.br> Spreuerbrücke is located nearby. It is spread over the confluence of the Reuss River and the lake, so the water is wild here. On the ceiling, there are paintings by Meglinger. Being created after a terrible plague epidemic, they remind the city residents of the temporality of being.

The Dying Lion sculpture glorify the heroics of the Swiss guardsmen, who remained faithful to their oath during the French Revolution.
Not far from this sad city symbol lies the Glacier Garden, where you can see real glacier potholes, look at the ancient branches prints and touch the fossils.


The mountains of Lucerne

You can get to Pilatus Mountain, which is 2,130 meters high, by a cable-railway or train. From there, you can admire the 73 mountain peaks of the Alps. Moreover, you can take a stroll to the top, which will take about 6 hours.
The Queen of the Swiss Mountains – Rigi – is located not far from Lucerne as well. Small trains run to its top, with the porters wearing historical clothes. Tourists will have an opportunity to enjoy magnificent sceneries and admire 13 lakes from the Rigi top. In a small Swiss city Lucerne, a tourist will definitely spend a few wonderful days full of magical impressions.