Davos: the main economic scene or the record holder of ski slopes? 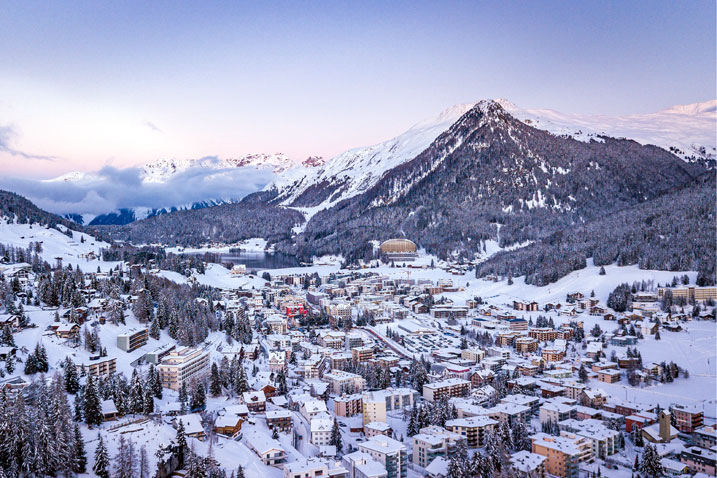 Switzerland became a tourist destination a century and a half ago. Since then, it has been the most coveted vacation spot.

Switzerland is a very mysterious country. Its secrets and peculiarities beckon and fuel the interest of travelers who want to learn more and more about the Confederation. Switzerland is rightly considered the heart of Europe. Its population speaks four official languages. Based on this feature, the country is divided into the German and Latin part, in which the Romance languages ​​are used.

Switzerland is called the land of the Alps and lakes. Mountains occupy most of the country's territory, and there are up to one and a half thousand lakes.

In the part of the country that is closer to Italy, the weather is mostly warm, on the plains, winter passes almost without snow, but in the mountains the air temperature below zero. In northern Switzerland, beyond the Alps, where a warm breeze cannot reach, is a lot of snow, and the temperature is -5C.

Davos is a Swiss mountain resort that hosts the World Economic Forum annually. The Forum is a non-governmental organization, which includes about 1000 of the largest companies in the world and brings together several thousand business and political leaders. It was founded in 1971 by Swiss professor Klaus Schwab as the main economic forum for discussion to help European enterprises improve corporate governance. It received its current name in 1987 and was recognized as an international institution in 2015. Leaders of countries, heads of huge corporations annually come to Davos for this forum. The resort becomesan unspoken capital, but at the same time remains a cozy part of mountainous Switzerland.

As a ski resort, Davos is suitable for skiers of all skill levels.It offers slopes for beginners and experts alike. Davos is at the highest altitude of the Alps and differs from the usual resorts. The ski areas are not connected by chairlifts.

Features of rest in Davos

During the World Economic Forum, prices for hotels and chalets in Davos shoot up greatly. Nevertheless, you can find a hotel that suits your budget. For example,rooms in hostels have all the conveniences. But what is more important, all guests, without exception, receive a bonus - a beautiful view of the Alpsfrom the window.

The resort can entertain guests of all ages and in all seasons. The events held here are suitable for both families and young people travelling alone.

Like many resorts, Davos is health focused. There are good clinics on the territory specializing in the treatment of skin diseases, allergies, and respiratory illnesses.

The Toy Museum was originally created for children, but this place turned out to be interesting for adults too. You can find there such rare and antique items that you will never see in a store. Some toys are custom made; others are historically very valuable.

The ice rink is very popular, the whole families spend time here. Many kids will take their first steps on the ice with an instructor.

Sleigh roads are suitable for both children and adults. It is very spectacularsled in the evening when the roadsare illuminated by lights. There is a children's center on the slope of Madrisahorn, so skiing can be alternated with indoor games. Chairlifts are also designed for children; restaurants are aimed at young visitors.

In Winter Sports Museum you can watch the evolution of skis, sledges, skates.

Many more interesting places can be found in Davos: Museum of Local Lore, Church of John the Baptist, Museum of Mining Crafts.

No one has yet regretted their choice to spend a vacation in Switzerland, and Davos is one of the most popular and prestigious destinations for active travelers.

The company "SWISSTRIP" organizes excursions in Switzerland and offers a VIP transfer from Zurich airport to Davos. We can offer a large fleet of executive class cars and VIP buses at your service.