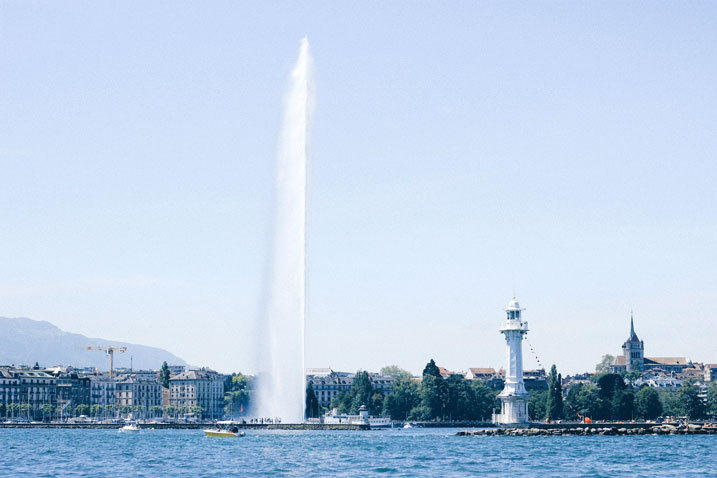 On Geneva Lake opposite the embankment, there is the symbol of Geneva – Jet d’Eau fountain (“the water flow”). It can be seen from almost any point and as popular with the Swiss as the Eiffel tower is with Parisians. Most official and charitable events in Switzerland use the image of this fountain for their symbols. The fountain is a powerful water jet that spurts 140 meters upwards. Every second, the pumps lift up about 500 liters of lake water.

Originally, this attraction used to be located in a different place and was built not for the beauty purpose, but for use. In the middle of the XIX century, a hydrotechnical network was built in Geneva, which was supposed to provide the growing city with electricity. The station supplied electricity not only to residents, but to more than 100 workshops and factories as well. At the end of each working day, when factories closed and machines were stopped, the excessive pressure appeared in the system that threatened to destroy the turbine. To reduce the risk, a safety valve was designed that drained excess water from the system. That time, the fountain jet was only 30 meters high. But even being that high, the fountain quickly became attracted curiosity and interest of many Geneva residents.

The fountain became so popular that the city council decided to turn it into a tourist attraction. For this purpose, the fountain was moved to another location and a more powerful pump was installed, making it possible for the water to rise as high as 90 meters. In 1951, the fountain power was once again increased and now the fountain jets rise 140 meters upwards. The fountain water is saturated with air, so it looks white, bur not dark as in the lake. Each water drop remains in the air for about 16 seconds before falling into the lake, so at any given time, 7 tons of water are “hanging” in the air.

Not long ago, the fountain was equipped with a led lighting system. In general, the fountain has always had illumination since its very opening; however, the modern system offers a palette of 65 thousand colors and shades. The fountain is operated by a team of 5 people, with several retired volunteers helping them, who are passionate about industrial progress and are responsible for turning the fountain on and off.

The fountain location makes it possible for everybody to see it from every side. You can walk along the embankment or watch it from a holiday cruiser. The closest approach to the fountain is from the Quai du Mont Blanc. Viewing deck offers a good view of the city pier. You can even stand next to it, but you should be ready to be wet with water from head to toe if the wind changes direction.

The fountain is open all year round from 10 am to 4 pm in winter and from 9 am till sunset in summer, but it is turned off during bad weather conditions and due to maintenance operations, and it is closed for repairs from late October to mid-November. Every year in September, the birthday of Jet d’Eau fountain is celebrated; on this occasion, a fair is held on the embankment and guided tours to the pumping station that powers the fountain are offered.

Guided tours offered by our company are the best way to see all the beauties of Switzerland. As a matter of convenience, you can order a transfer service in comfortable executive class cars.