Our customers are the top priority. We comply with all sanitary and hygienic requirements, show care and vigilance towards our guests
the same way we do for our loved ones. We care about the safety of the services provided. 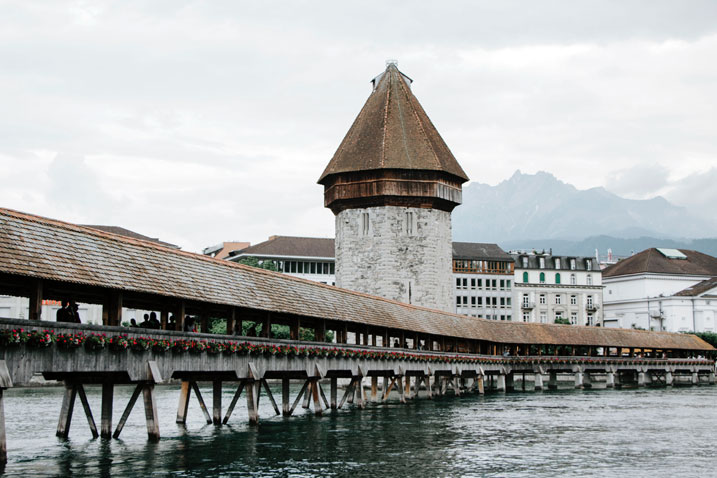 In that part of Switzerland where German-speaking residents predominate, Lucerne town is situated, lying on the banks of a large lake Vierwaldstättersee against the backdrop of a magnificent Alpine landscape. Here, there is a bridge featuring a tiled red roof, which is famous for being known as the oldest wooden bridge in Europe that connects the banks of the river Reuss. It is as many as 198 meters long. This bridge has long been accepted as the town symbol.

In the middle of the bridge, there is a tower with a beautiful red tiled roof standing right on the water. It consists of eight faces. Originally, just like many other towers, this tower was built together with the bridge to defend the town. As it’s often the case, later it was turned into a prison, where there was even a torture chamber. Together with the prison, the state coffers used to be stored here as well.

Inside, under the roof that extends along the entire bridge, there are triangle-shaped paintings. There are totally 112 of them. Two hundred years later, they were reconstructed and nowadays you can see the images demonstrating the town history and the exploits of local residents fighting for independence of Switzerland.

Here, you can see the images of two venerated saints of this town as well: Mauritius and Leodegar, which are accompanied by inscriptions describing them.

Proceeding a little to the west, you can find just another bridge – Spreuerbrucke built in 1407, which was later decorated with dark pictures dedicated to the topic of Death Dances.

Many tourists come to this town to enjoy its parks in the shadow of the trees next to the lake, as well as its numerous places of interest. If you approach it from the northern bank of the river, you can enjoy a magnificent view of the old medieval town, where peculiar labyrinths of mysterious streets have been preserved. Here, the old town wall with its threatening defensive fortresses, the original wine market, as well as the town hall and the Court Church of Leodegar and Mauritius have been preserved.

To honor the fallen Swiss guard soldiers of the French king Louis XVI, who fell in battle protecting the king and his family from the enraged revolutionary crowd attacking the Tuileries Palace in 1972, the lion monument has been erected. The monument presents a mortally wounded animal, which has been carved in a rock niche. It was created by the famous Danish sculptor Bertel Thorvaldsen.

In this small town, you can also visit one of the largest transport museums in Europe, look into the planetarium, or visit the Gletschergarten Glacier Garden and the local lore museum.

Originally, Lucerne town used to be a fishing village out-of-nowhere, but after a trade route through the Alps was built in the 13th century, which connected the Rheine valley and Northern Italy, the town immediately began to grow and develop, with its prosperity enlarging significantly, thus becoming a major trading center. Since then, the town has been attracting a large number of tourists who come here to admire its places of attraction and enjoy its quiet atmosphere.

Our company organizes guided tours to the Swiss cities. For the sake of your convenience, we provide group transfer services by VIP class cars and buses.