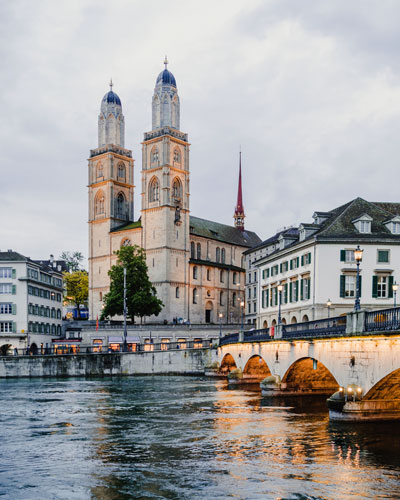 Located at the confluence of the Limmat river with lake Zurich not far from the Alps, Zurich is not only the financial but also the cultural center of Switzerland, as well as one of the cities offering the highest quality of life and being the most expensive in the world. Although many people know it due to its luxury shops, the city also enjoys a rich historical and cultural heritage of its magnificent old town and numerous tourist attractions such as museums, art galleries, parks, churches and viewing decks that are worth getting to know.

One of the best things to do in Zurich is to get lost in its beautiful historical center (Altstadt), consisting of 4 blocks surrounded by several ruins left of an old medieval wall. The most interesting area is located next to the Limmat river and around the town hall (Rathaus), where the most charming alleys and squares, medieval houses and traditional buildings with colorful facades are concentrated. Apart from hundreds of shops and restaurants located in this pedestrian area, there are some major city attractions, such as Bahnhofstrasse shopping street, Grossmuenster, Peterskirche and Fraumuenster, Grimmenturm tower, the guild houses on Limmatquai street and Cabaret Voltaire, where the cultural movement of Dadaism has begun.

Lake Zurich, stretching to the southeast of the city and being surrounded by picturesque hills, is another must-see place in Zurich. This huge lake, which is more than 40 kilometers long and has a banana-shape, is perfect for strolling or cycling along the waterside, especially in summer, when everyone can swim on some of its beaches or have a picnic. Another of the best attractions of this lake is a boat tour around towns, luxury villas, beaches and Rapperswil, known as the town of roses due to its gardens with more than 15,000 rose bushes.

Grossmuenster Church, built at the river Limmat between 1100 and 1220, is one of the most iconic buildings to visit in Zurich. Being Romanesque in style and known as the great cathedral, this church is of great historical significance, since it was here that Zwingli began his Protestant reformation in Switzerland in 1519. Outside the Church, stand out two of its bell towers built in 1487 and 1492. While inside there are incredible stained-glass windows, a Romanesque crypt, a choir window, bronze doors, and a monastery with magnificent Romanesque column caps. Before leaving the church, it is worth climbing the 187 steps, which will lead to the top of one of its towers, to enjoy views of the city and the river. Other interesting churches in Zurich include Fraumuenster that impresses with its five stained-glass windows, and Peterskirche with its beautiful clock at the tower.
Opening hours: every day from 10 to 18 hours, in winter it closes an hour earlier.

Another of the best things to do in Zurich is to visit the National museum, which is located in a French-style building that looks like a medieval castle. Being the most visited in the country, this historical museum, besides an extensive collection of permanent items, also houses temporary exhibitions, debates, conferences and seminars, with all of them being focused on knowledge and learning. Another museum worth visiting in Zurich is Kunsthaus, which houses one of the most important art collections in Europe, including works by such great masters as van Gogh, Picasso, Matisse, Munch and Monet, and many others.

Bahnhofstrasse, better known as the railway street, is the most famous in Zurich and one of the most luxurious and exclusive shopping streets in the world. On this almost one and a half kilometer-long golden mile, one can find stores unaffordable for the vast majority of pockets, such as Tiffany & Co, Cartier or Louis Vuitton, as well as art galleries, cafes, restaurants and, chocolatiers – before everything else, such as fantastic Laderach Chocolatier chocolate.
Other of the most attractive streets in the historical center are Limmatquai, stretching along the river Limago and is full of beautiful houses, and medieval Augustinergasse lane, which any tourist will fall in love with at first sight due to its colorful facades and wooden windows.

Excursions from our company «SWISSTRIP» are the best way to see all the attractions not only in Zurich, but in the entire Switzerland as well. For you to feel comfortable, we provide VIP transfer in comfy executive-class cars or buses.